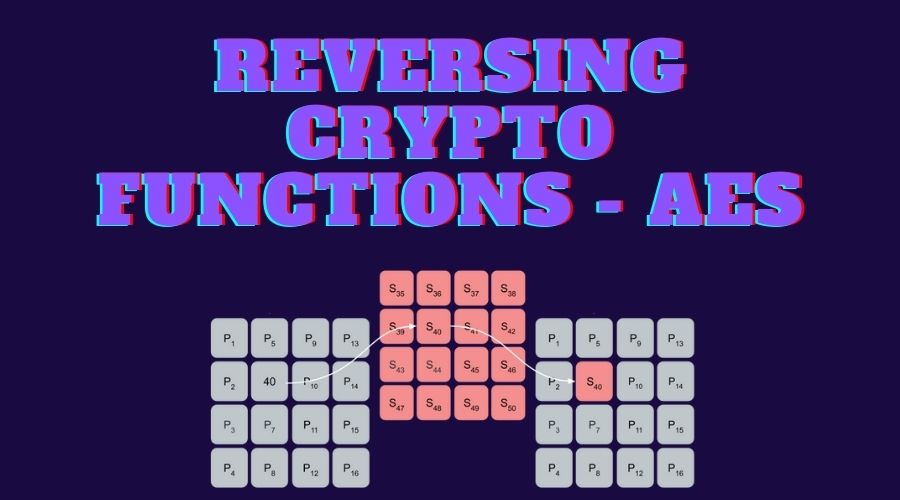 
The Advanced Encryption Standard (AES) algorithm is a successor to the Data Encryption Standard (DES). With the advancement of technology, the key length and small block size of DES made it less secure. In 1997, NIST announced a competition to come up with a stronger algorithm; thus, AES was born.

The AES Algorithm will break up a plaintext string into 16 byte “blocks” that undergo several rounds of encryption. The steps are detailed in the official AES documentation: 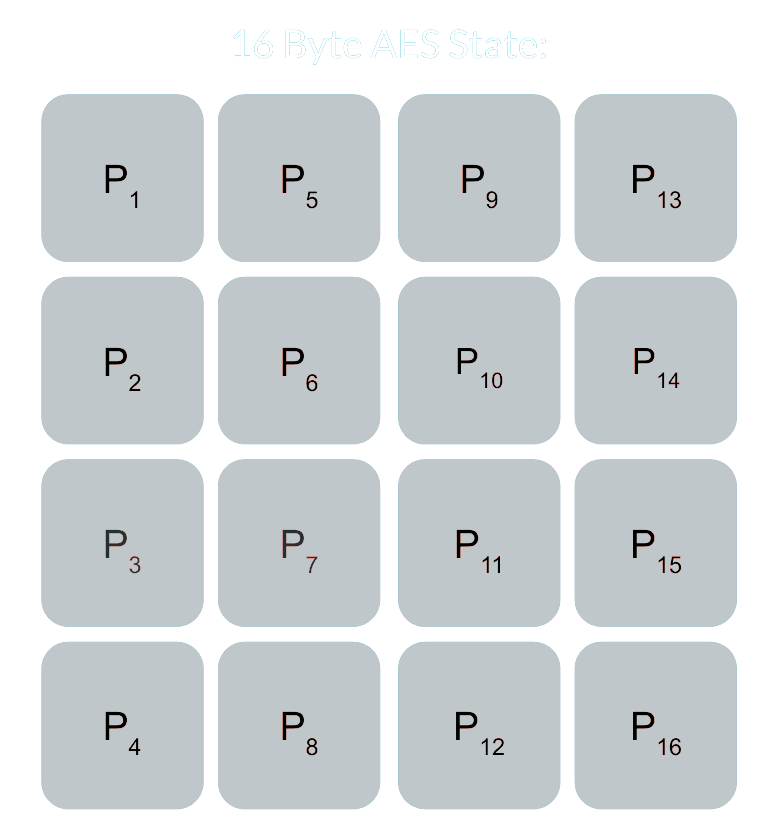 Each additional word is the result of XORing the previous word by the word at index i - NK where i is the current index and NK is the number of four-byte words that are in the original cipher key (4, 6, or 8 depending on the number of bits in the key). When the current index is a multiple of NK, the previous word is transformed before undergoing the XOR. This consists of the word being rotated to the left by one (i.e 0xAABBCCDD becomes 0xBBCCDDAA), then each byte being substituted by a value in AES’s Substitution Box (S-Box)– a 256 byte array. This new four-byte word is then XORed by a “round constant”, RCON. The round constant, RCON, can be computed from the algorithm: 2i-1 << 24 which, however, uses a Galois Field to perform multiplication instead of normal Base-10 multiplication. This type of multiplication is beyond the scope of this article, but you can read more about it here. The round constants can also be hardcoded in with the following values for the standard AES-128 algorithm:

The entire AES-128 key expansion algorithm could look like the following Python code:

The AES S-Box is a 256-byte hardcoded array. This array is used for the SubWord function in the Key Expansion algorithm, as well as the SubByte function in the main cipher. The bytes in the S-Box are as follows:

The SubBytes function in AES will replace each byte in the state with a byte in the Substitution Box at the index Pi. The following graphic represents this exchange: 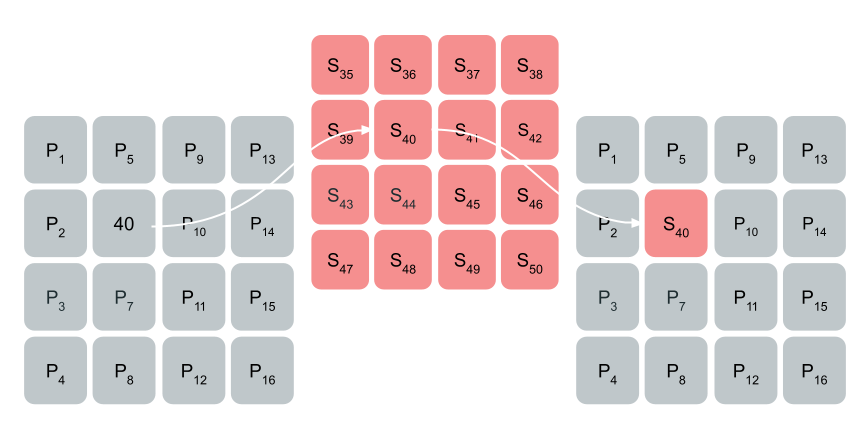 The code for this function could look like the following:

The ShiftRows function will rotate each row in the state to the left. The first row is not shifted at all, the second row is shifted by one, the third row by two, and the fourth row by three.

The code for the ShiftRows function can be:

MixColumns will perform matrix multiplication on each column in the state. The multiplication here also uses the Galois field like in the Key Expansion function. I managed to find a pure Python implementation of this algorithm in GitHub from the user lovasoa which looks like the following: 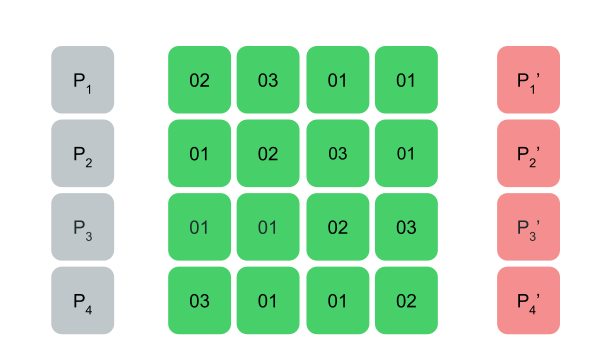 The entire function can be shown as the following Python code:

The AddRoundKey function in AES will XOR part of the expanded key by each column of the state. This can be shown as the following code: 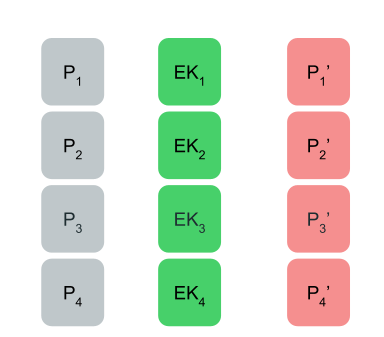 To make the AES algorithm more efficient, the MixColumns, ShiftRows, and SubBytes functions were combined into a a single operation that utilizes five lookup tables. The key expansion algorithm is the same as the original AES algorithm and the state is treated as a normal array and not as a 4x4 matrix.

The first four lookup tables (T-Tables) are generated by multiplying each byte of the S-Box by the matrix used in the MixColumns function. This will create four tables containing 256 four-byte words. They can be generated using the following algorithm:

The final T-Table combines each byte of the S-Box into a four-byte word and is only used during the final round of encryption.

The entire generation of the lookup tables can look like the following Python code:

For each round of encryption, the AES T-Table algorithm will XOR a byte of the four lookup tables at the index of the original plaintext array. For example, a normal round would look like the following pseudo-code:

This method is more efficient than calling the separate SubBytes, ShiftRows, and MixColumns functions because it is all done in one step. There is no need to peform multiple loops or function calls when all the methods are combined at once.

The final round of encryption is similar to the normal rounds except it is using the fifth T-Table and each XOR gets appended to the ciphertext. The following pseudo-code demonstrates this process:

The full code for the AES T-Table implementation could look like the following:

A quick win when trying to identify if a binary is using AES is to look for either the Substitution Box or any of the lookup tables from the T-Tables implementation. For example, in my previous post on sodinokibi ransomware, it was found that the sample was utilizing AES to encrypt data. We can search for the first word of one of the T-Tables in Cutter and see that it exists in the binary.

Searching for word in T-Table in Cutter

Now if we go to that location we can confirm that this is one of the T-Tables used by AES. 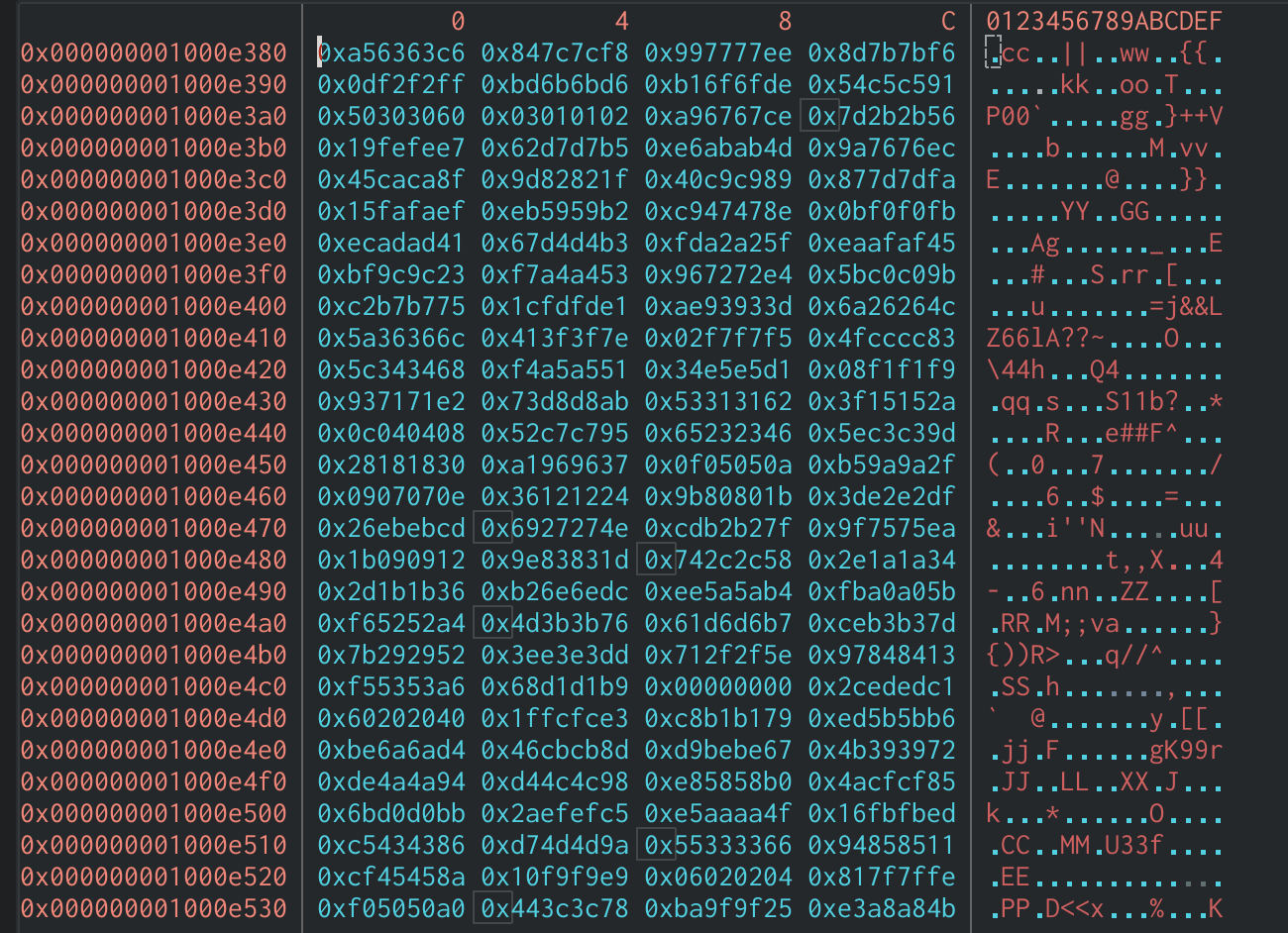 Hexdump of T-Table in Cutter

This is a great indicator to identify AES. If we search for references to this array in Cutter, we will see one of the XOR operations during a round of encryption which confirms the use of AES.

Another way to tell if AES is being used is to identify the individual ShiftRows, SubBytes, MixColumns, and AddRoundKey functions. Breaking down and identifying each function individually is more efficient than reverse engineering a large amount of code at once. We will be using the GitHub project tiny-AES, a pure implementation of the AES algorithm using C code, as an example to show how the code would look in Assembly.

The AddRoundKey function in this binary takes three arguments. The first argument is shifted left by four then AND’d by 0xff0 which is the same as multiplying it by 16, the same size as the state. This is a good indicator that this argument will hold the current round number. This value is then added to the third argument of the function. Because the state cannot be more than 16 bytes in length, we can assume that the third argument is the expanded key and the second argument is the state. After this, we can see two loops that will XOR the state column-by-column against the expanded key. 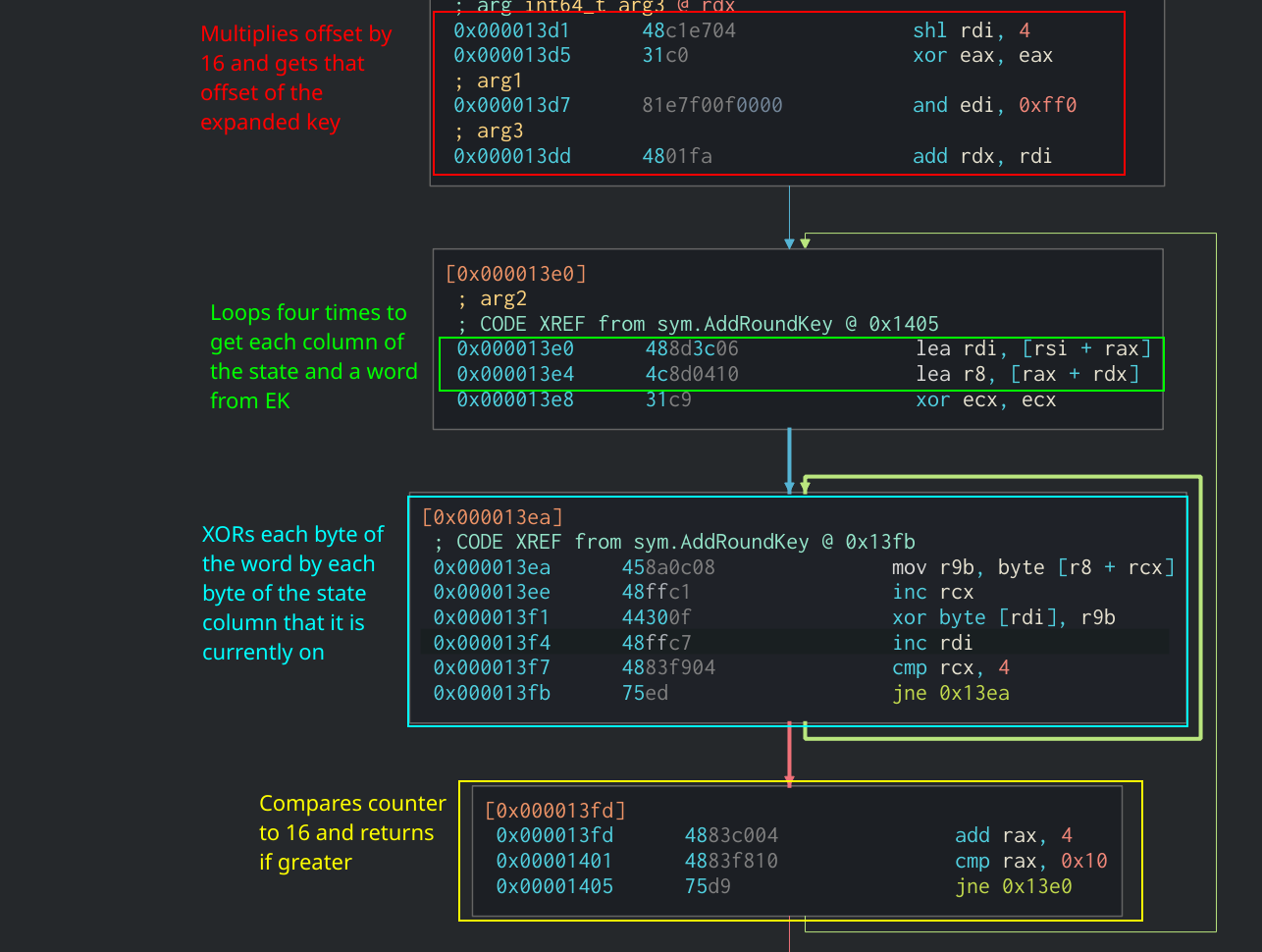 When compiling the code from the GitHub project, the SubBytes is added in-line in the main cipher function rather than making a function call. We are able to identify it as SubBytes by the fact that it takes each byte of the state and uses it as an offset in the S-Box array. Then it will take the byte at that offest and put it into the state at the current index. We can see all of this being done in two loops in the Cipher function: 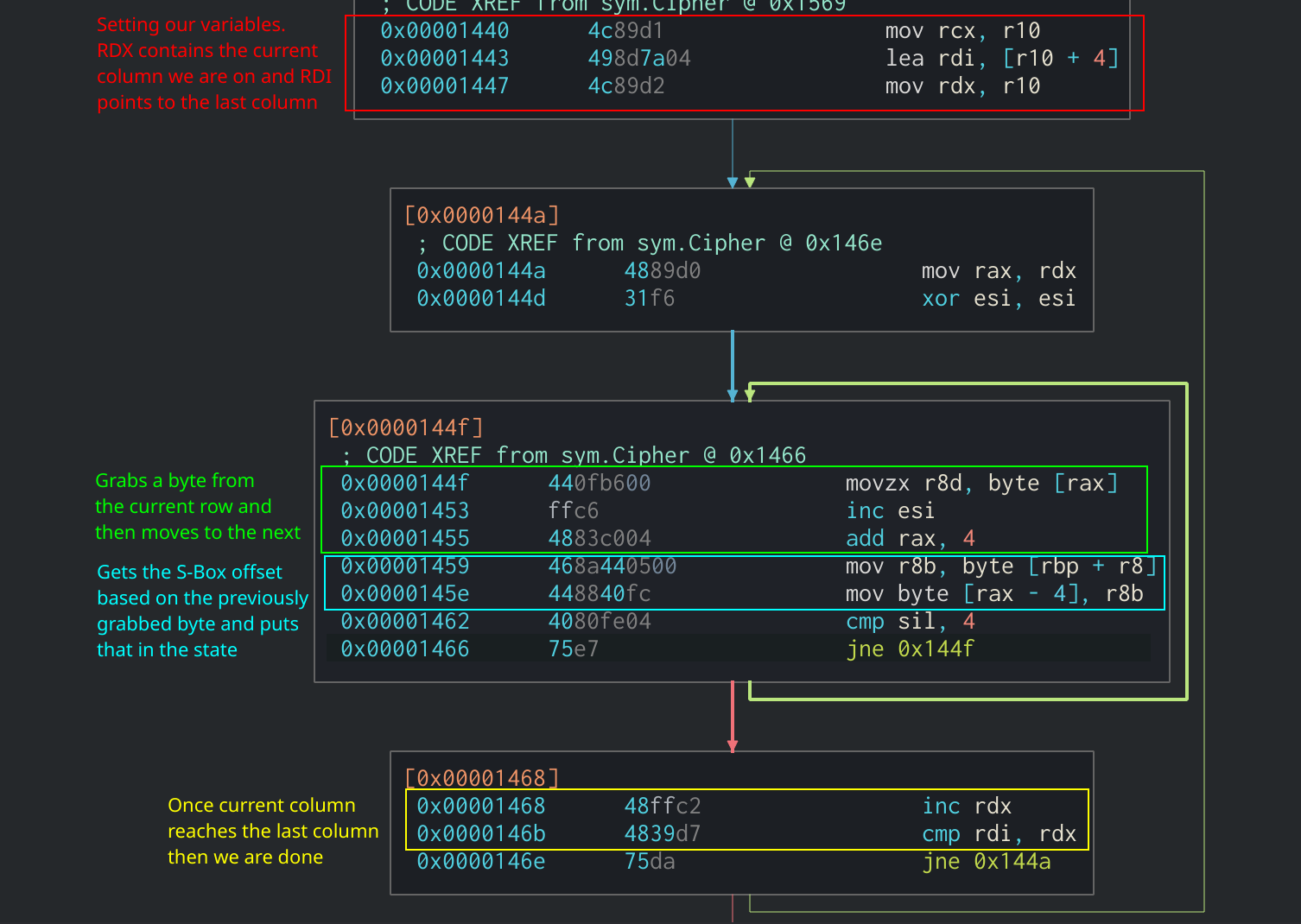 The ShiftRows function is also added in-line in the main cipher function. It is pretty easy to spot as it consists of several mov instructions on the state to shift each row the correct amount of times. 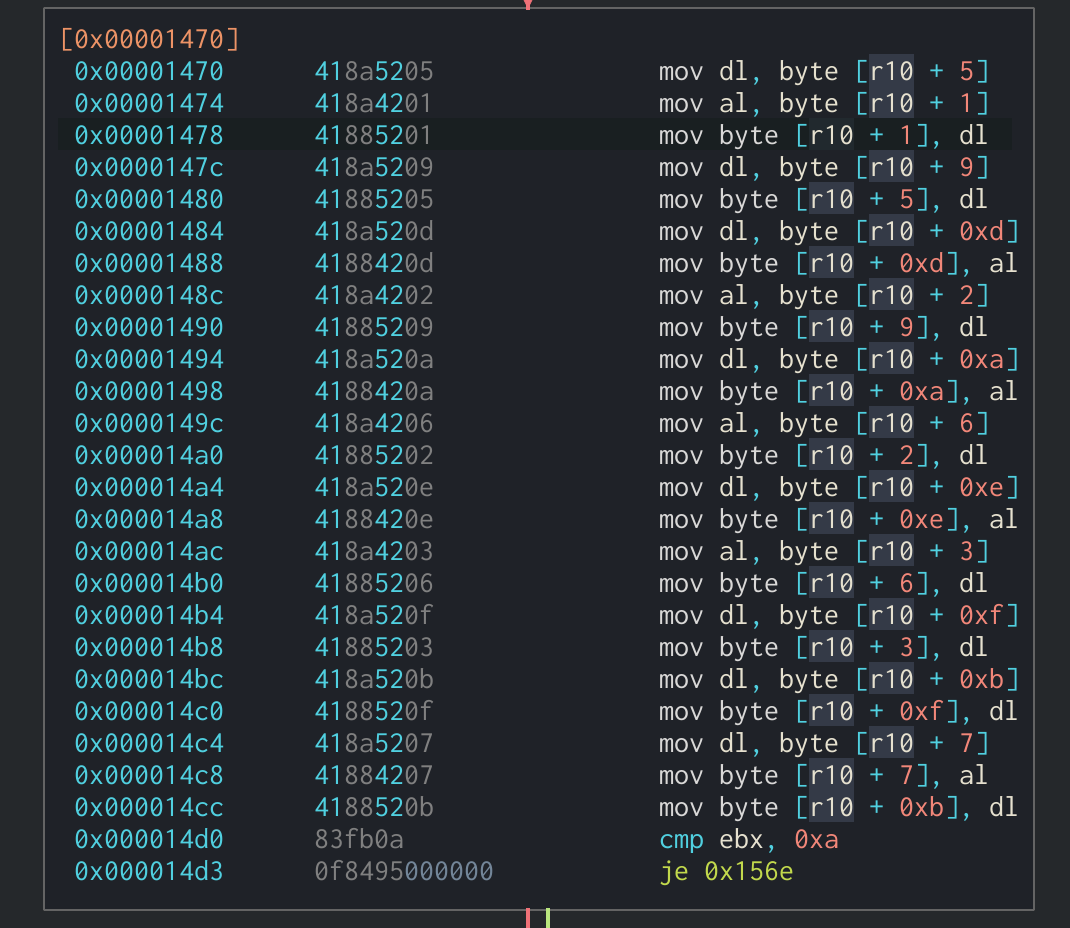 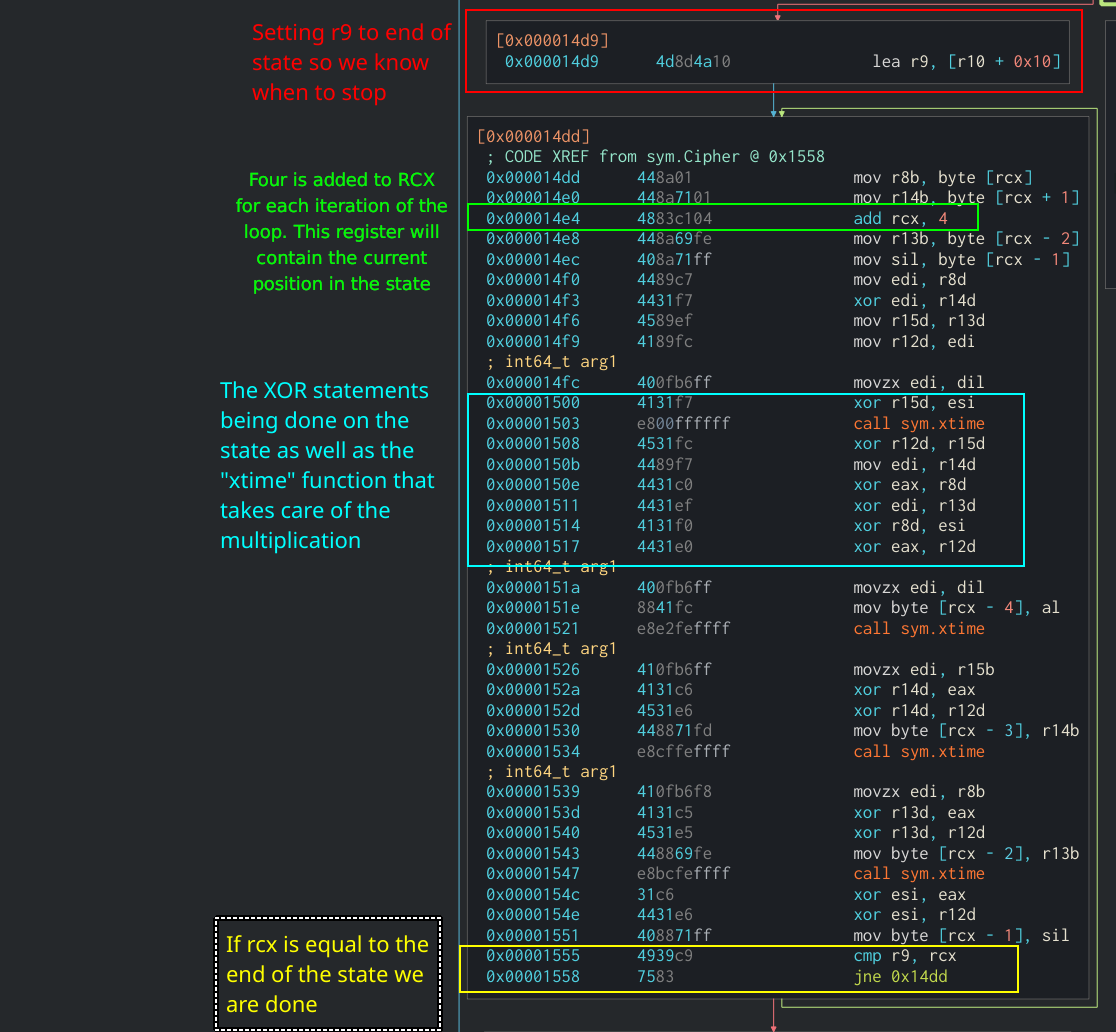 Since the Key Expansion algorithm is the same between the T-Table and normal implementations of AES, this indicator can be used to identify AES in other binaries. The first part of the Key Expansion algorithm copies the first four words of the original key into the expanded key. In Assembly, this would look like several mov instructions moving a byte of the original key into the new expanded key. This example is from the tiny-AES GitHub project mentioned earlier:

The next part of the Key Expansion algorithm checks to see if the current index is divisible by four. If it is, the application will split the previous word into separate registers and performs a lookup of each one in the S-Box (r9). Afterwards, it rotates each byte individually to a new register. This is an in-line implementation of the SubWord and RotWord functions that were described earlier in the article. Finally, the most significant byte of the new word is XOR’d by one of the Round Constants stored in r10.

RotWord, SubWord, and Round Constant use in Assembly

We can see in the Assembly that the new word is being XOR’d by the word four indices previous in the expanded key. 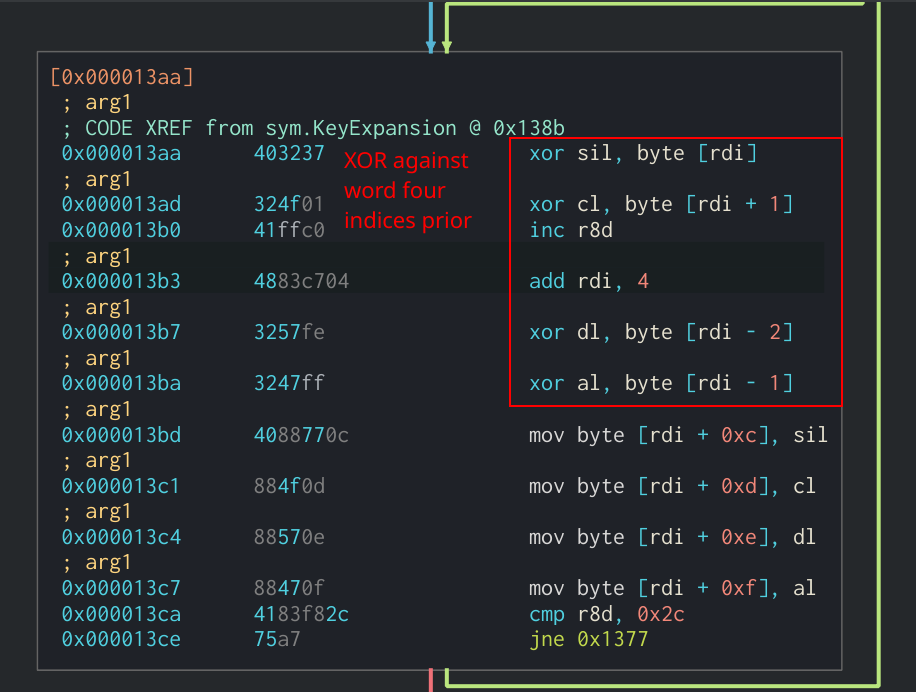 Hopefully this article can help analysts identify implementations of the AES algorithm in other binaries. For additional reading into some of the design decisions for AES and more info on the mathematics behind it, I recommend reading two of the official NIST documentations on AES:

If you have any questions or comments about this post, feel free to message me on my Twitter or LinkedIn. I hope to do more posts like this in the future.