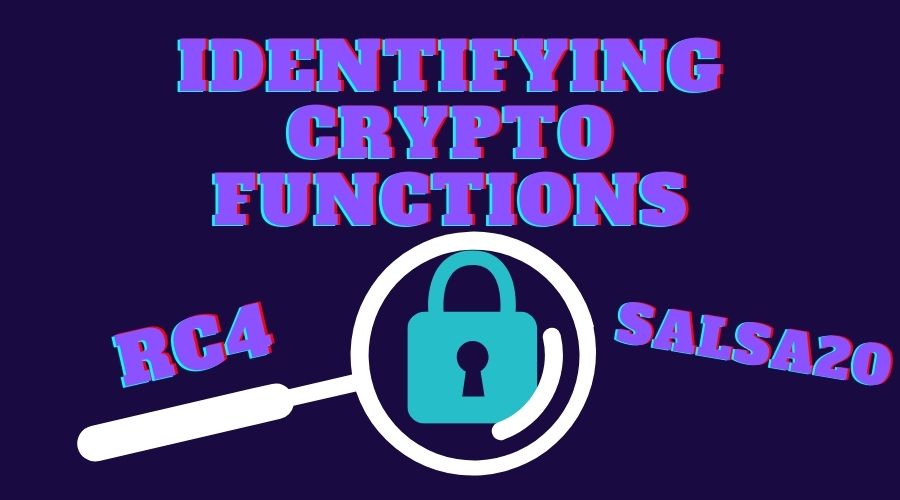 
Many malware samples use encryption for Command and Control (C2) communications, encrypting files, string obfuscation, and many other tasks. It can be challenging to know which encryption algorithm you are looking at when analyzing a sample. This post aims to teach newer analysts about common encryption algorithms, how they work, and how you can identify them when reverse engineering.

RC4’s internal state is an array of 256 bytes, denoted as S[], ranging from 0-255. RC4 will use its Key Scheduling Algorithm (KSA) to randomly swap the bytes in S[] using the user inputted key as the seed. S[] is then used to generate a keystream via the Pseudo-Random Generation Algorithm (PRGA). This keystream, denoted as KS[], is the same size as the plaintext input. Finally, RC4 will XOR the keystream by the plaintext to create the encrypted ciphertext.

The Key Scheduling Algorithm for RC4 will take the internal state referenced earlier, denoted as S[], and permutate it based on a key the user inputs. For each index in S[], the algorithm will swap the value with another index of S[] based on the value: (j + S[index] + key[index % keylength]) % 256, where j has a starting value of zero. This can be shown in the following Python code:

The output from the Key Scheduling Algorithm is used to generate a keystream using RC4’s PRGA. This keystream will be the same size as the plaintext input and is generated by taking the value at S[i + 1], and swapping that with the value of (j + S[i + 1]) % 256. For this example, i is all numbers from zero to the length of the plaintext and j is zero. After this swap, the value S[ (S[i] + S[j]) % 256 ] is appended to the keystream, thus creating a pseudo-random list of bytes. This can be shown in the following Python code:

Putting it All Together

Once the keystream is generated, the RC4 algorithm will use it to encrypt the plaintext input by XORing the bytes together. Decryption works by deriving the same keystream using the original key and XORing that by the ciphertext. This entire process is shown in the following Python code:

An easy way of identifying that an application is using the RC4 algorithm is by looking for the value 256 when the algorithm is creating the initial state (S[]). This normally occurs in two loops that run 256 times each and will be either creating or modifying an array. 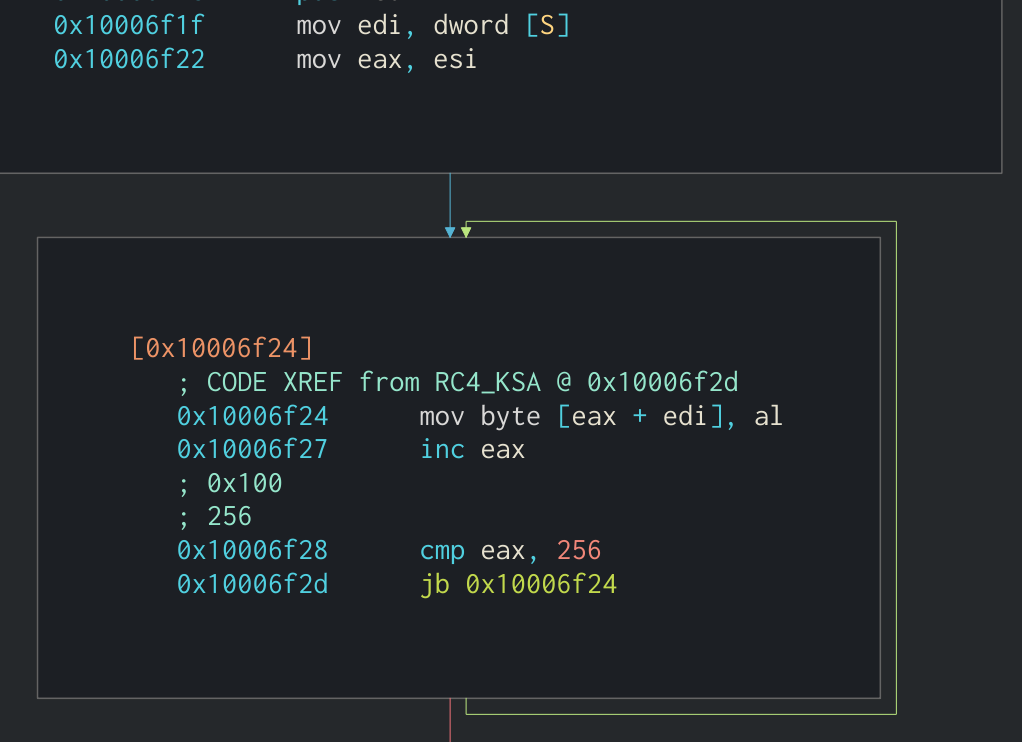 It is important to notice that in the second loop in RC4’s key scheduling algorithm the bytes in S[] will be swapped around. You can see this in the following screenshot: 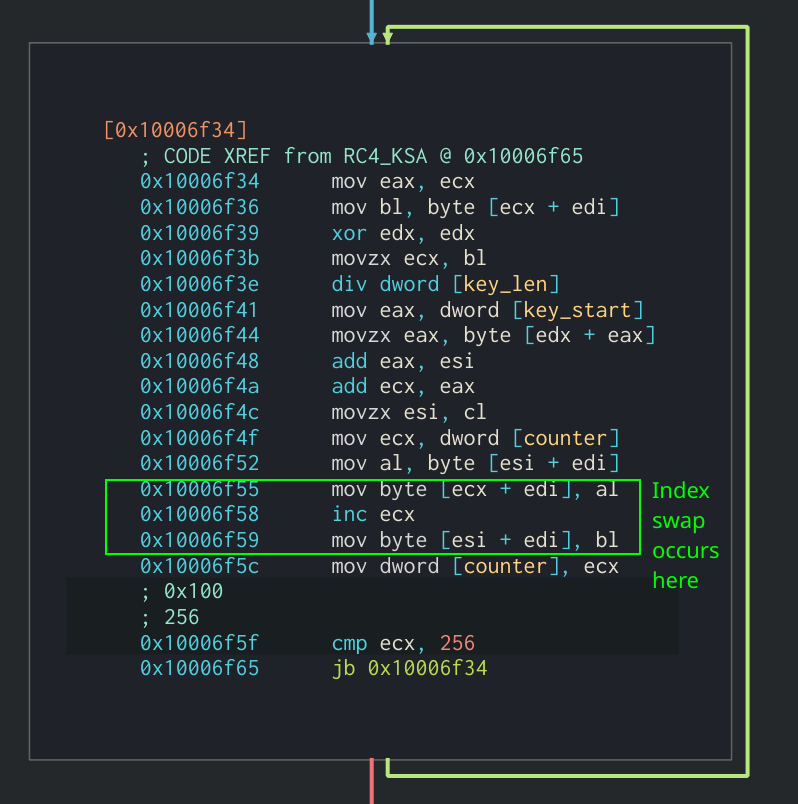 You can also identify RC4 by its pseudo-random generation algorithm. Two important things to notice here are the use of the previously created S[] variable and the XOR operand being used. Keep in mind that this section will be looped by the length of the plaintext, not 256 times like the KSA. 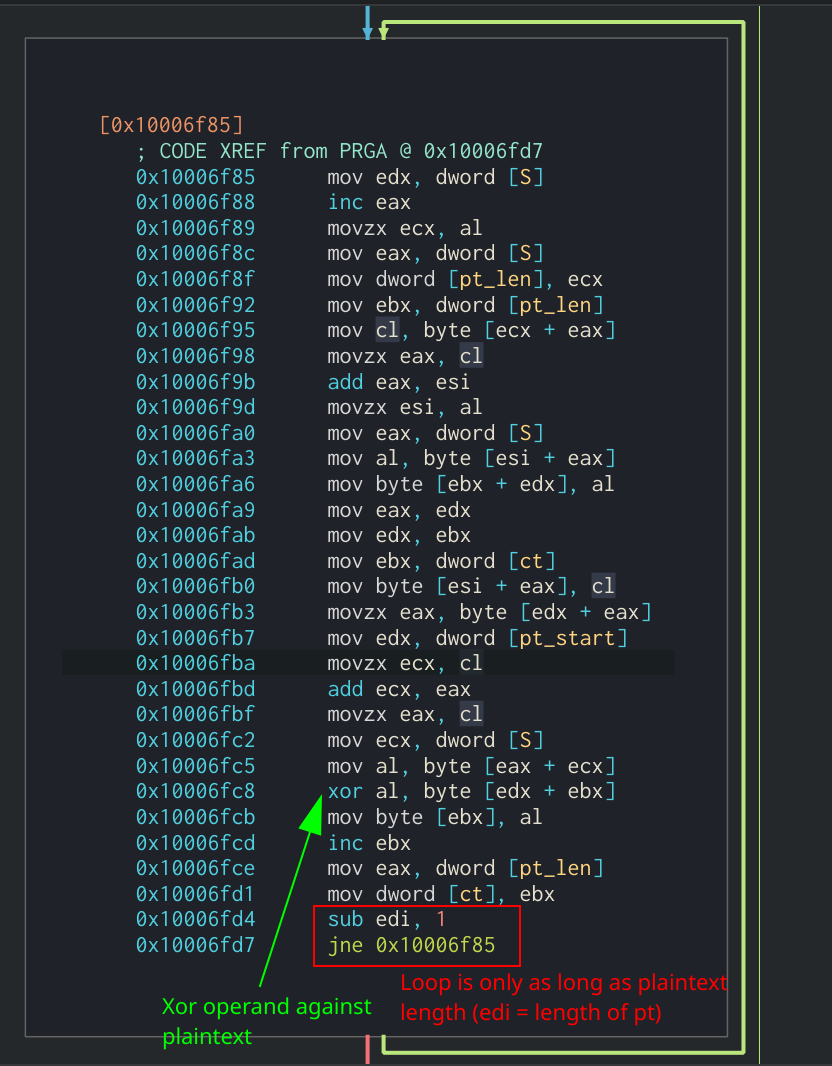 By identifying both functionalities in the code, it is safe to say that this is the RC4 algorithm. This particular example was from my analysis of the Sodinokbi Ransomware in a previous post.

Salsa20 works by encrypting data in 64 bytes “blocks”. The algorithm is counter-based, meaning that a counter variable is used when generating the key depending on which “block” of data is being encrypted. The internal state of Salsa20 consists of an array of 16 32-bit words that can be shown as a 4x4 matrix: 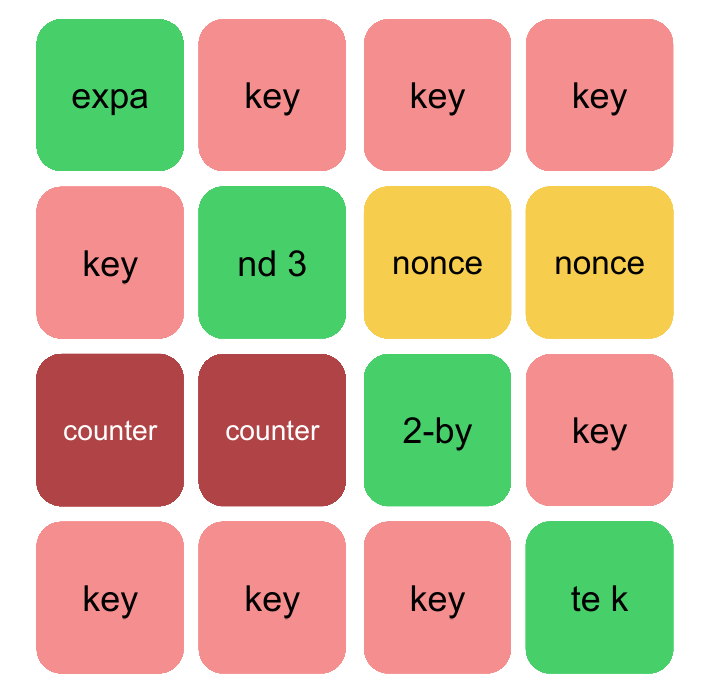 This state then undergoes a “quarter-round” function which randomizes the values in the matrix. Once the state is run through this function multiple times, normally 20, the final result is then added back to the initial state’s values. This becomes the keystream that will be XOR’d against 64 bytes of the plaintext data. Finally, the counter variable will be incremented and the process starts again with the next 64 bytes.

The initial state for Salsa20 consists of 16 32-bit words consisting of the following:

An example of how the state would look with a 16 byte and 32 byte key can be seen below: 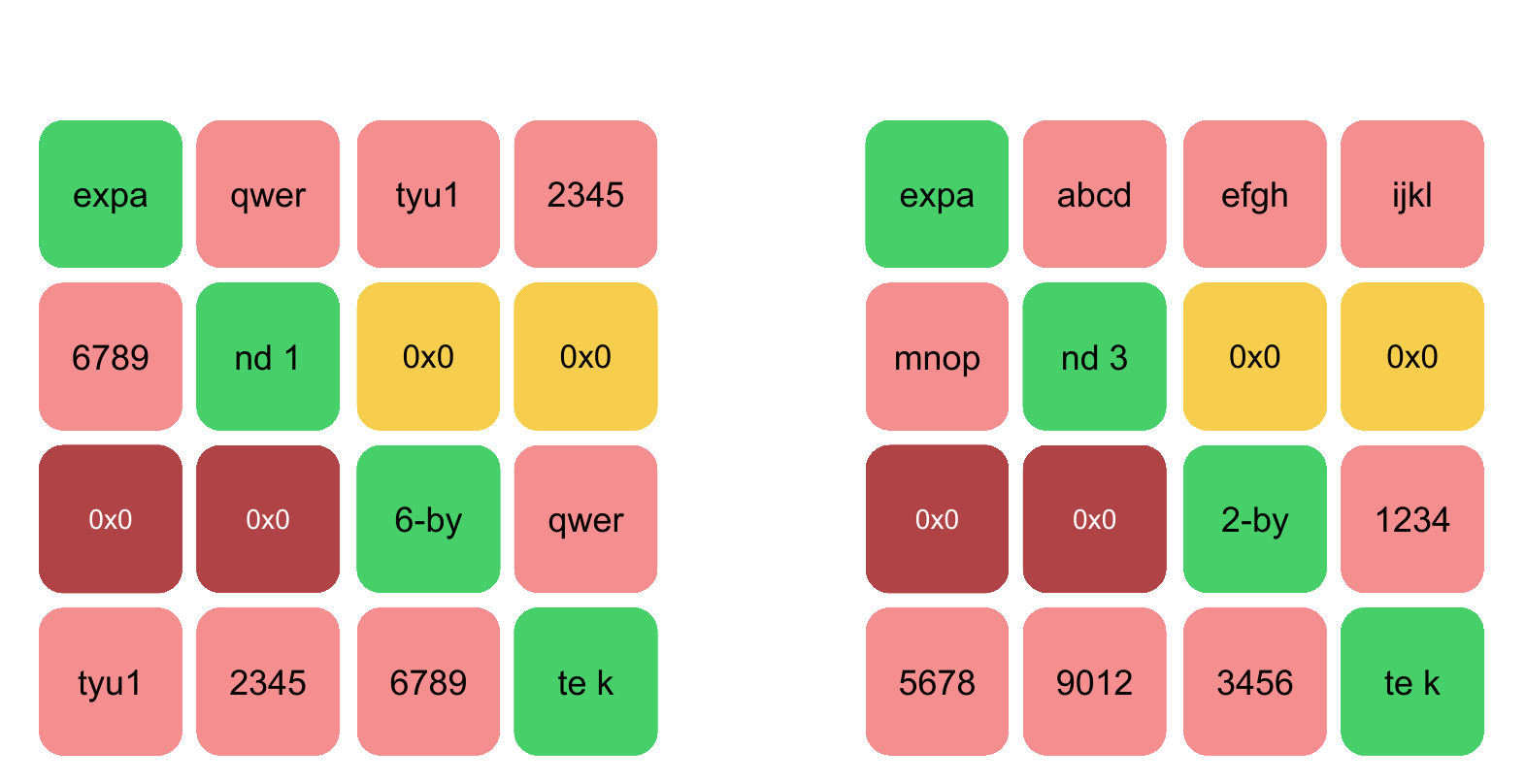 Difference between 16 and 32 Byte key in Salsa20

Once the initial state is run through this permutation function for the number of rounds specified, it will then add the newly randomized state to its original values. This will ensure that the process cannot be reversed and the key cannot be recovered. The entire keystream generation process looks like:

Putting it All Together

The easiest way to identify Salsa20 when analyzing a binary is to look for the constants expand 32-byte k or expand 16-byte k. These will almost always be present for Salsa20 and are a guaranteed indicator. 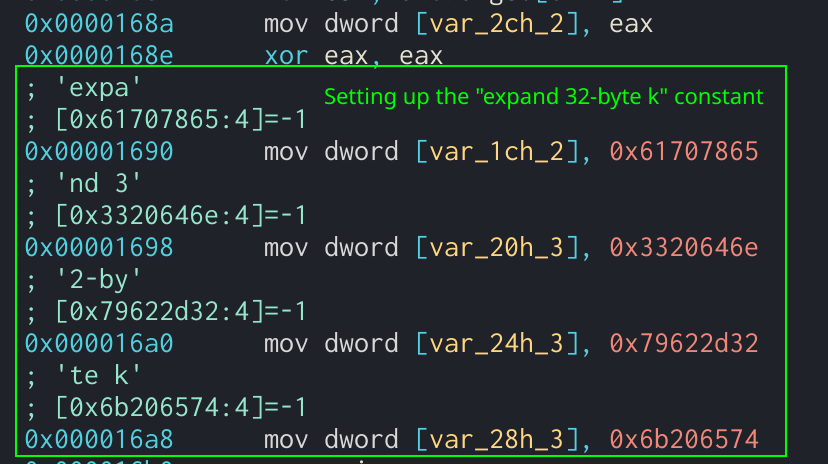 Salsa20 constant value being moved into the state

However, in order to evade analysis, the author might change these constant values. If these values are changed, next thing to look for would be the quarter-round function that Salsa20 uses to generate the keystream. To locate this, the analyst should be looking for the rol operands followed by the normal quarter-round values: 7, 9, 13, and 18. 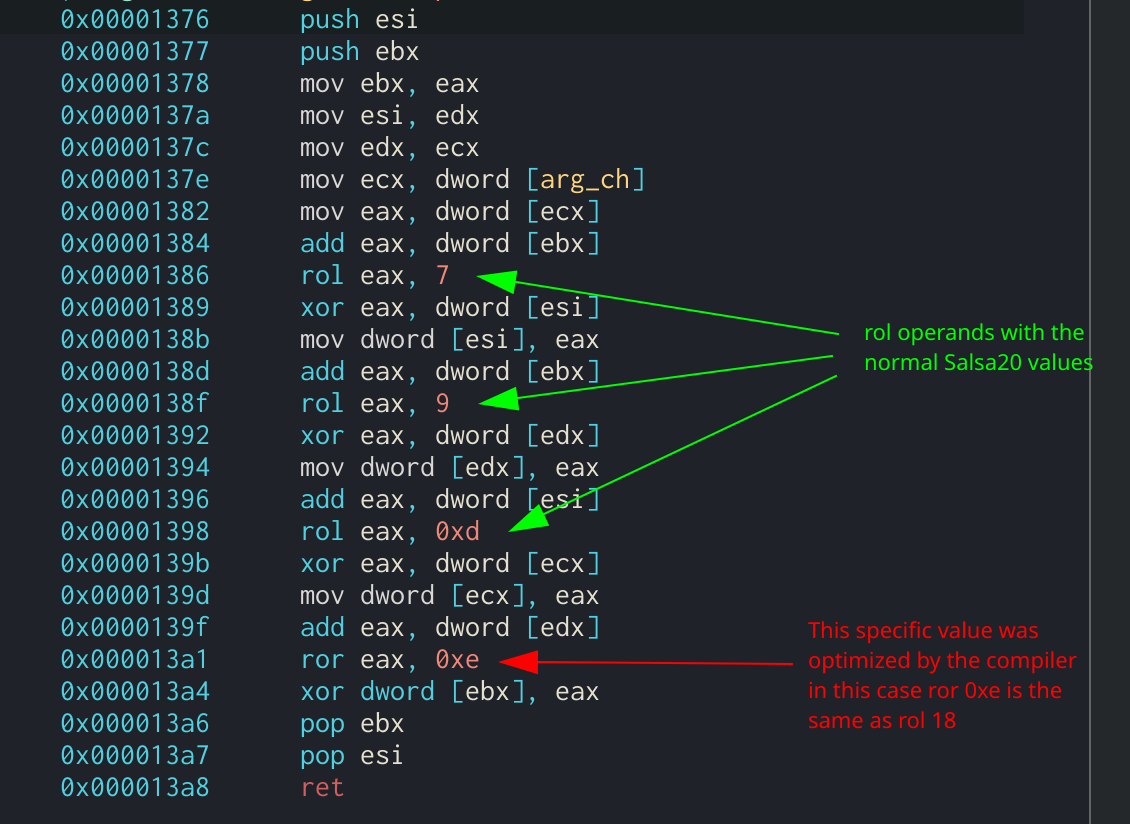 The examples for this section were from an open source version of the Salsa20 algorithm written in C by alexwebr.

Hopefully this post will help newer analysts in identifying basic crypto functions that can be used by malware. By learning how the algorithms operate at a low level, it will make it easier to spot them in the wild and possibly be able to identify different variations of the same algorithm that an author may use to evade detection. If you have any questions or comments about this post, feel free to message me on my Twitter or LinkedIn.