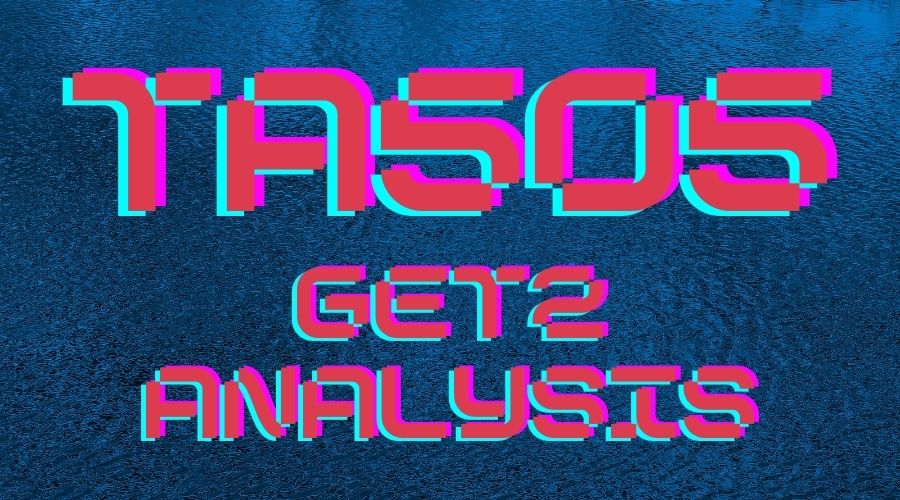 
The TA505 group debuted Get2 and SDBot last month in a new phishing campaign. While there have been some great analyses on the SDBot RAT that is dropped, there have not been many on the Get2 downloader. I wanted to take this opportunity to do my own analysis on it. I will not be going over the macro-enabled word document itself, just the DLL that is dropped. There are also two versions of the dll, x86 and x64. This analysis will focus on the x86 version. If you want to follow along you can get the sample from Hybrid Analysis here.

On top of having fake instructions, the DLL also contains self-modifying code. The DLL calls VirtualAlloc to allocate 3060 bytes of memory. It then dumps data into the newly created space using memcpy.

It will then decrypt this data by taking every dword, xoring it by 0x6949, rotating the bits left by 4 and adding 0x77777778. I have created a small python script to emulate this functionality using r2pipe, radare2’s API. You can find that here. After the decryption occurs, we can see new code formed in memory that is executed. This code appears to be importing functions such as VirtualAlloc, GetProcAddress, VirtualProtect, LoadLibraryA, and VirtualFree. Which leads us to believe that more unpacking is necessary. 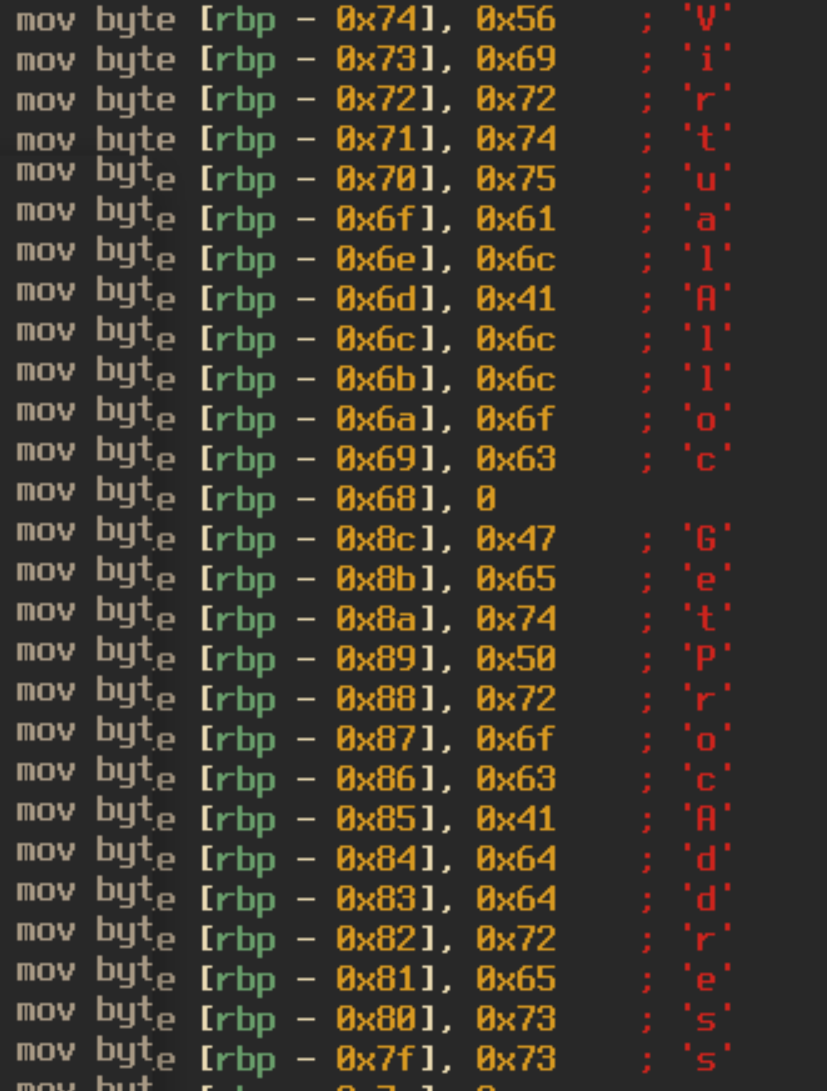 We can see that earlier there was data moved into the memory space at [ebp – 78], [ebp – 74], and [ebp – 70] which is referenced in this new set of code based on the offset of the argument, [ebp + 8]. The data moved into [ebp – 78] contains a list of bytes that will be decrypted. [ebp – 74] contains 0x3c870 which is the length of the data to be decrypted, and [ebp – 70] contains 0x4178, the decryption key. This round of decryption is slightly different from the first. The first thing that the malware does is loop through each index of the encrypted data and if the index is divisible by two then it will skip two bytes and move the data at that index into a buffer. For clarity, this follows the pattern [2, 3, 6, 7, 10, 11, 14…] and can be represented as the following python code: 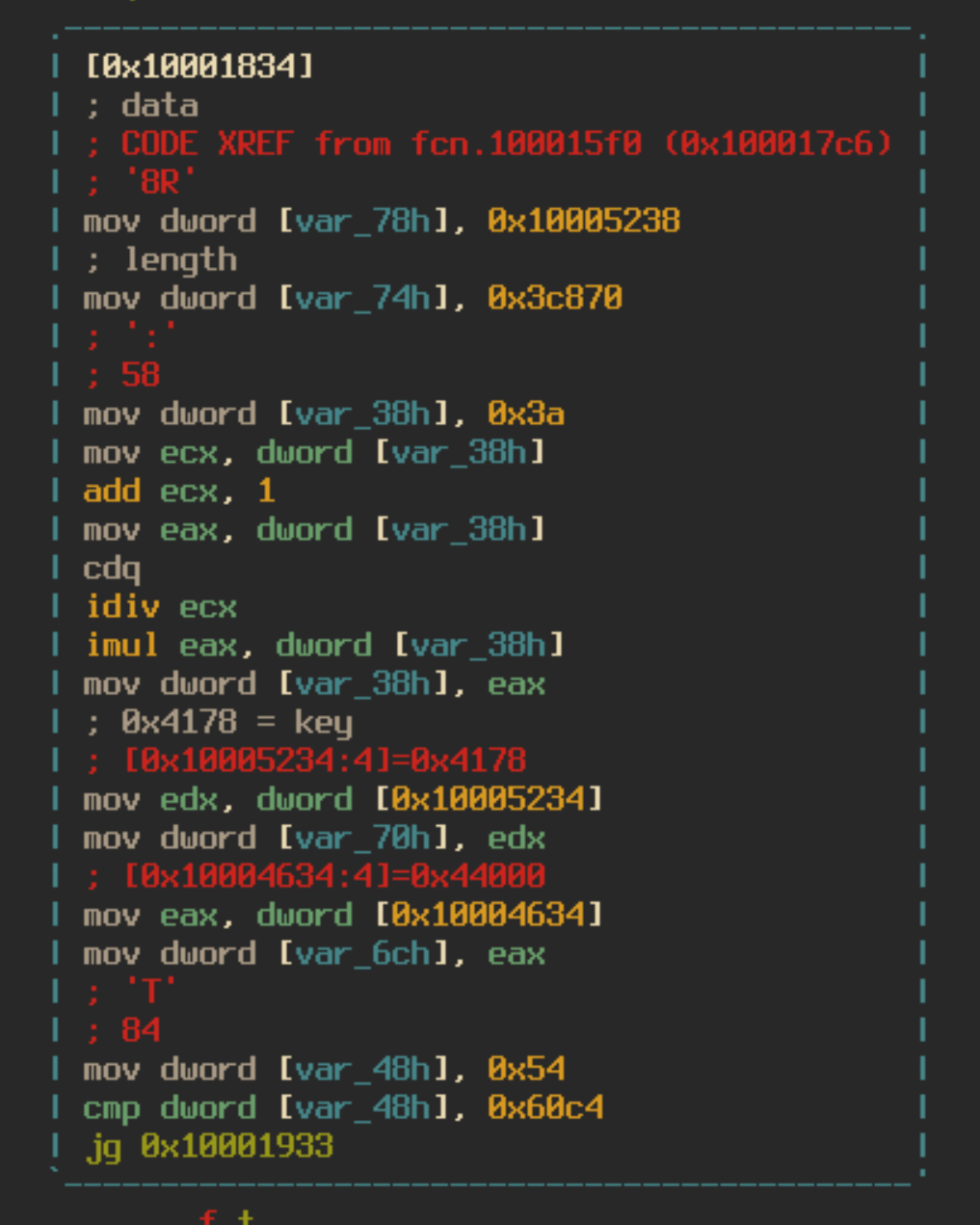 Once the data is moved into the new buffer the malware will follow the normal decryption process we saw earlier by xoring each dword and rotating the bits left by 4, this time using the key 0x4178. 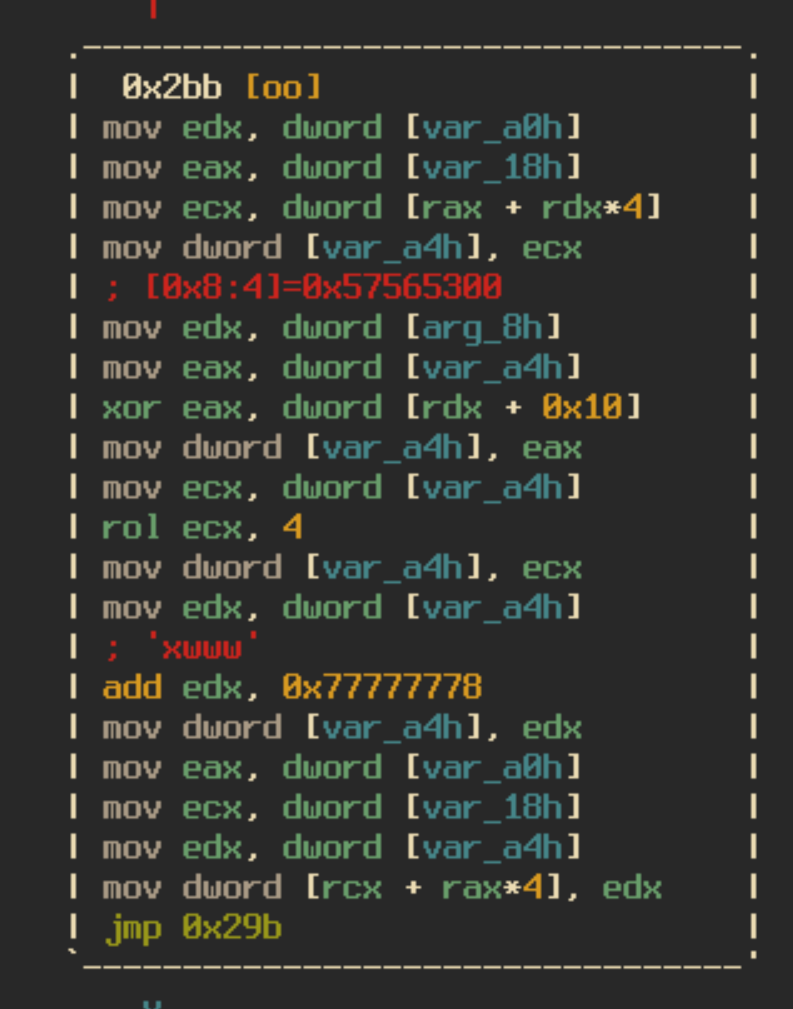 The resulting data looks a like a mangled PE header, which leads us to believe that there is more deobfuscation necessary. The final stage of this process is quite complicated. It involves multiple ways of moving bytes from our newly decrypted data to an empty buffer, but no actual decryption occurs. The paths that the deobfuscation algorithm could take are:

These paths were all dependent on a “check” function that would take into account the current index of the encrypted data, and two global variables. The check function works as follows:

I have made a python script that mimics the unpacking functionality and writes out the final payload to a file. You can find that here. 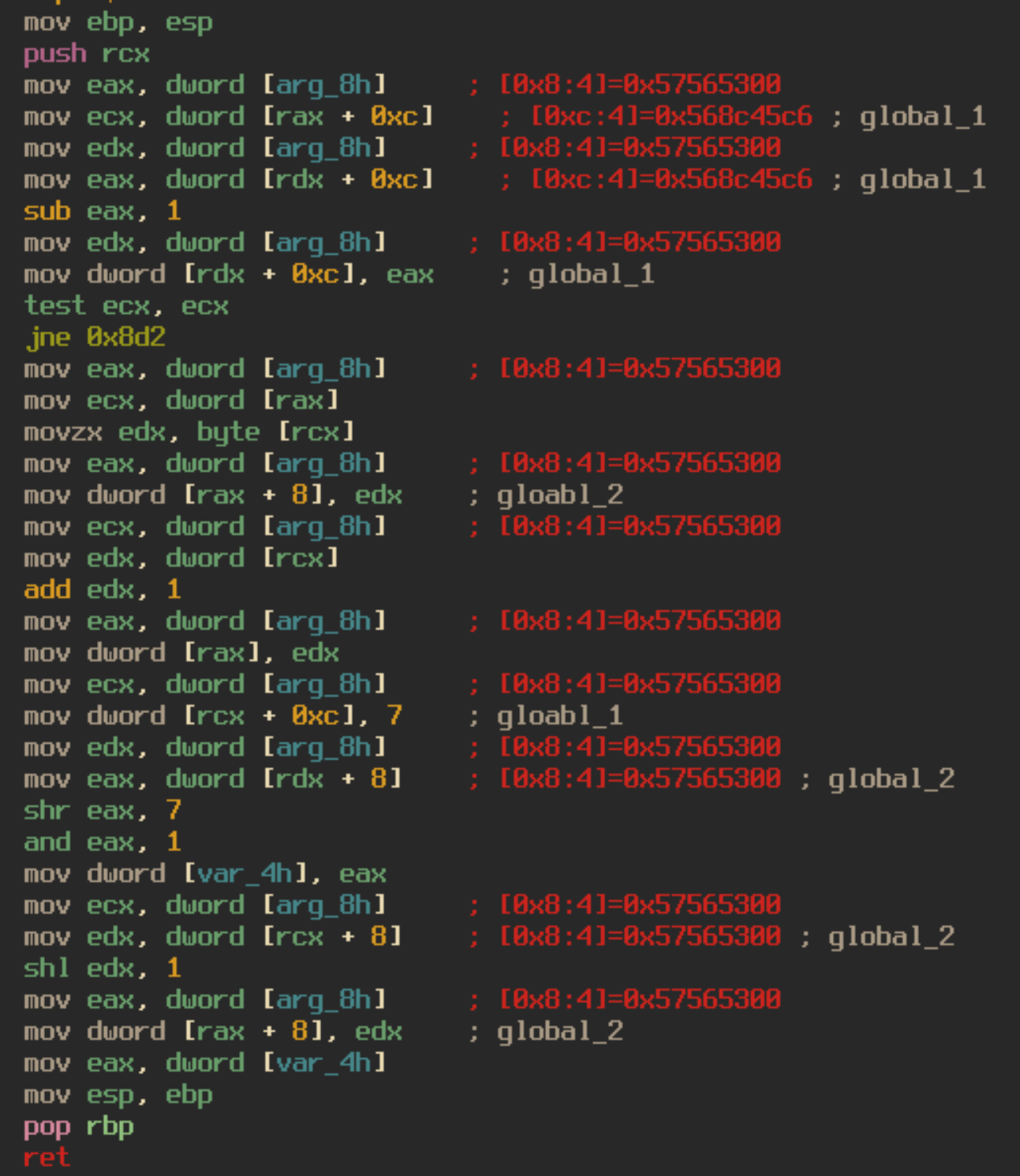 Here is a tinygraph view of the final deobfuscation function which shows just how complicated the algorithm is: 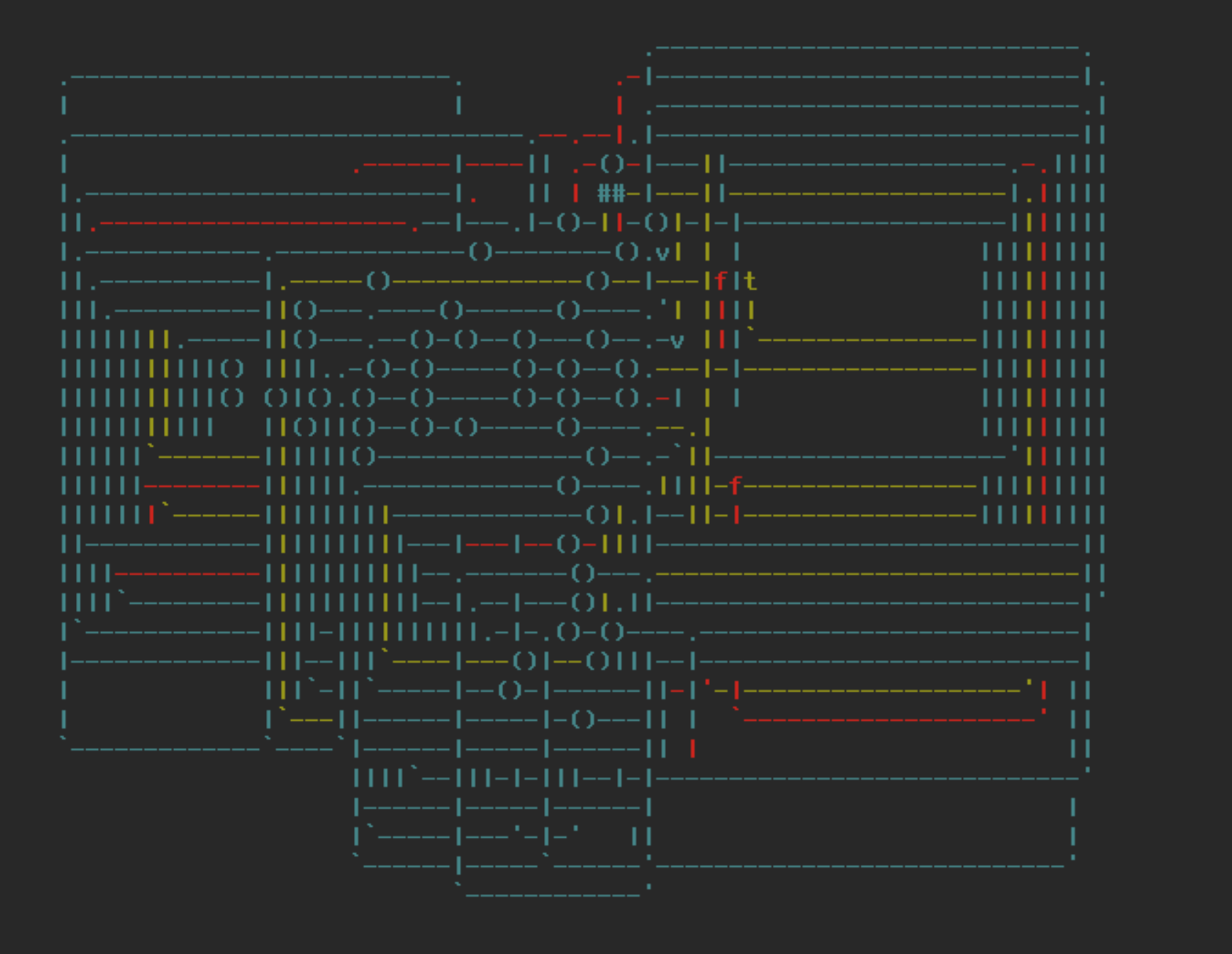 The extracted binary is UPX packed. We can simply unpack it using the command upx -d <packed_binary>. Looking at the exports of the newly unpacked binary we can see the function getandgodll_Win32.dll_IKAJSL. This is most likely where execution will continue.

It will then send a POST request with these parameters to the C2 using the WinHttp library, with the useragent:

The response will send back a list of URLs that contain the final payload (normally SDBot). The Get2 downloader will download these payloads and run them on the victim’s machine.

Overall this was a very interesting and fun sample to analyze. The code was complicated and seemed sophisticated, which is what you would expect from this threat actor. I am hoping this article helps others with analyzing this particular downloader. I am always open to feedback, so feel free to send me messages on my Twitter or LinkedIn letting me know what I can improve on in these articles.